The Polish Science Contact Agency PolSCA since April the 26th 2016 is registered in the EU Transparency register under the identification number: 055587821539-77, Section IV – Think tanks, research and academic institutions.

Early into 2004 the President of the Polish Academy of Sciences (PAS) initiated efforts aimed at creating an office based in Brussels that would support the participation of Polish science in the European Research Area. The final shape of the new PAS foreign unit was agreed at the end of 2004. Consequently, Polish Science Contact Agency (PolSCA) started its activities in March 2005.
For a transitional year 2005 and the first quarter 2006 PolSCA Office functioned as a section of the PAS Scientific Centre in Paris. Since April 2006, PolSCA has been operating in Brussels as an independent foreign PAS unit parallel to the other PAS centers in Paris, Rome, Vienna, Berlin, and Kiev. PolSCA is a subsidiary scientific establishment created on the basis of Art. 68 of the Statutory Act of the PAS and has a legal personality in Belgium. PolSCA is supervised and funded by the Polish Academy of Sciences. It represents all Polish scientific institutions and communities and acts for their benefit. The mission of PolSCA is to promote, facilitate and foster participation of the Polish R&D community in European projects and initiatives and in particular to reinforce Polands position in the EU framework programs. Since June 2020 he is a Director at the Polish Science Contact Agency (PolSCA) in Brussels. Tomasz is a graduate of the Poznan University of Life Sciences where he obtained his master’s degree in biotechnology. In the years 2002–2003 he participated in the ‘Advances Studies in Molecular Biotechnology’ program at the University of Ghent in Belgium. In 2004, he started his four-year doctoral studies at the John Innes Center in Norwich in Great Britain. After receiving his PhD from the University of East Anglia, he moved to the National Institute of Basic Biology in Okazaki (Japan) as part of the JSPS scholarship. In 2010, he returned to Poland and joined the team of the Foundation for Polish Science, where he was involved in overseeing the implementation of programs financed from FNP own funds and programs financed under the ERDF, i.e. he coordinated the work of two teams implementing projects financed under EU structural funds for years 2014-2020. Since November 2018, he has been part of the PolSCA team in Brussels, where as an expert he was involved in monitoring science, research and innovation policy at the European Union level. 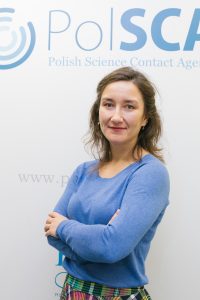 Since November 2021 she is an expert in the Polish Science Contact Agency in Brussels. Magdalena graduated in international relations and social policy from Warsaw University, she had scholarships at l’Institut d’Etudes Politiques de Paris – Sciences Po (France) and Northeastern Illinois University (USA) and participated in the TransFormation.doc program by the Polish Ministry of Science and Higher Education implemented by the University of Alberta (Canada).

She has gained over ten years of professional experience in Polish scientific and research institutions, being responsible for preparation, administration and settlement of R&D projects and dissemination of their results (framework programmes, structural funds). In 2020-21 she managed the task of state services of the fifth stage of the multi-annual programme “Improvement of safety and working conditions”, as part of which, among others, she initiated and co-implemented a study on the safety of remote working. She participated in the work of working groups on smart specialization of the Mazowieckie Voivodeship and expert consultations on the barometer of business impact on the Sustainable Development Goals.

As an expert of the PolSCA Office, she is responsible for monitoring EU research and innovation policies in the areas of health, social sciences and humanities (clusters 1. and 2. HE) and cross-cutting issues in Horizon Europe: cooperation between science and society (e.g. missions), gender equality, open science, scientific excellence and widening participation. Since June 2020 she is an expert in the Polish Science Contact Agency in Brussels. Joanna  holds a master’s degree in history of the Jagiellonian University in Krakow. She was a CLIOHRES.NET scholarship holder. For several years she was involved in a number of documentarian projects dealing with social history of Central Europe in the 20th century, when she cooperated – among others – with The Foundation of the KARTA Centre and History Meeting House in Warsaw. Between 2012 and 2019 she was working for National Science Centre, one of Polish funding agencies, supporting basic research, where she was involved in two scientific networks: Joint Programming Initiative Urban Europe and ERA-NET COFUND BiodivERsA. Since 2015 she was managing the POLONEZ mobility programme – under MSCA Cofund of Horizon 2020 – with a budget of approx. 21 M EUR. At the PolSCA Office’s activities, Joanna monitores EU R&I policy in areas such as: scientific excellence (European Research Council #ERC), regional policy and in the field of innovation (European Innovation Council #EIC). In addition, she is the leading expert at the PolSCA team in the areas of climate science and biodiversity, environment and bioeconomy (clusters 5 and 6 of Horizon Europe). 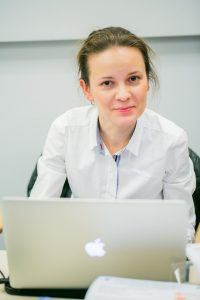 In April 2021 she took up a position of a specialist in Polish Science Contact Agency in Brussels. She graduated in Cultural Studies at the European University Viadrina in Frankfurt (Oder) and completed postgraduate studies in European Administration at the Adam Mickiewicz University in Poznań and Hochschule für Wirtschaft und Recht in Berlin. She has experience working in a public relations agency, a publishing house and in the implementation and promotion of cultural and scientific projects at the European Network Remembrance and Solidarity Institute. From 2016 to 2021 she was employed at the German Embassy in Warsaw in the Department of Science and Research, where she worked, among other things, in preparing reports, organizing events, receiving delegations and providing information on science-related topics in Germany. At PolSCA she deals with administrative and communication issues.

Our basic activities include: